Culver is proposing to increase the tax to one dollar, in hopes of generating $130 million in state revenue.

Retailers in Keokuk fear their customers may go to other states such as Missouri, where the tax is $0.17 a pack.

The increase was approved this week by the Senate.

Again, Not A Good Day To Quit Smoking! 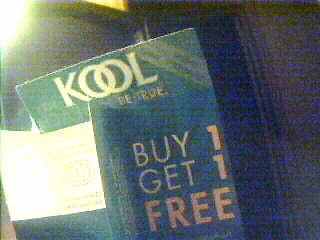 My cigarettes were on sale again (that's why I'm posting the picture again). I thought that after the last time they wouldn't be "2 for 1" again because my brand of cigarettes are very rarely on sale like this!

I believe Kools are one of the most expensive brands of cigarettes! I used to smoke Newports years ago but I have been smoking Kools for longer than I care to remember!

So far the cheapest place for me to buy my cigarettes is at the gas station down the street. They cost much more at the grocery store and I have heard that they are much cheaper down south. So this was a welcomed surprise seeing as how much cigarettes cost as a whole.

Maybe they are trying to discourage smokers by raising the price of cigarettes so high but I think its just going to make people (smokers that is) more angry.

So for now I'm very grateful for being able to buy 2 for 1 and you can bet I bought as many packs of cigarettes as I could!